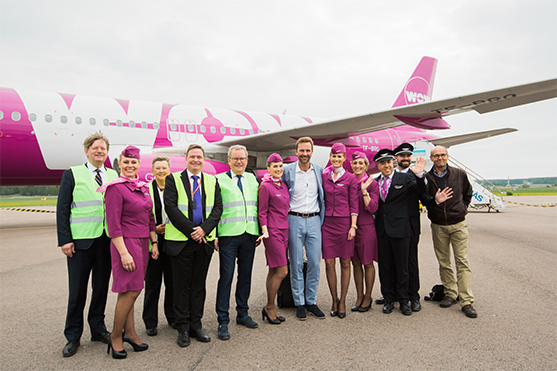 WOW air made its first landing at Stockholm-Västerås Airport at lunchtime on 19 May. Skúli Mogensen, CEO of WOW air, in the blue suit, is flanked by his crew and the welcoming committee from Västerås: from left, City Chief Executive Bo Dahllöf, Chair of the airport’s Board of Directors Lena Söderberg, Acting CEO of the airport Anders Gärdström and Chair of the City Executive Committee Anders Teljebäck. Bosse Hedberg, Swedish ambassador to Iceland, is stood farthest right. Photo: Henrik Mill

A one-way ticket from Västerås to Reykjavik costs from SEK 519, including taxes.
This is the first time that WOW air has flown from Sweden and bookings are good, according to CEO of WOW air, Skúli Mogensen.

“Here at WOW air, we are proud and pleased to be flying from Sweden at last. For a new low-cost airline on a new market, bookings are exceeding expectations. But then we are offering Swedes some of the lowest fares to Iceland, the USA and Canada,” says Skúli Mogensen, CEO and founder of WOW air.

“We are well equipped to take the fight for passengers to those airlines that currently fly from Arlanda and our goal is to more than double our capacity to North America during the coming year,” says Skúli Mogensen.

“We are very pleased that WOW air has chosen our airport for its launch in Sweden. It means that more people will discover how smooth the transport links are to and from our airport, as well as how easy it is for passengers to get around our compact terminal. We will have the opportunity to show more passengers the benefits of our airport, while also offering a number of attractive new destinations,” says Eva Wetterstrand, Director of Marketing at Stockholm-Västerås Airport.

Starting today, 19 May, WOW air will fly from Stockholm-Västerås Airport (VST) to Keflavik International Airport (KEF) in Reykjavik four days a week. There are then direct onward connections from Reykjavik to Boston (BOS) and Washington D.C. (BWI) in the USA, as well as Toronto (YYZ) and Montreal (YUL) in Canada.
Departures are on Mondays, Thursdays, Fridays and Sundays. A return flight from Västerås to Reykjavik costs from SEK 1,139. The ticket price includes taxes, booking fees and one item of hand luggage weighing up to 5 kg. Additional charges apply for preselected seats and check-in baggage.

For passengers travelling on to the USA and Canada, the stopover in Reykjavik is approximately one hour.

Bookings can be made directly via the airline’s website: wowair.co.uk

WOW air is Iceland’s only low-cost airline and is wholly owned by its founder and CEO, Skúli Mogensen, who used to live in Sweden. The company was formed in 2011. WOW air has invested in new, fuel-efficient aircraft. Its fleet has an average age of 2.5 years and consists of Airbus A320, Airbus A321 and Airbus A330.

Stockholm-Västerås Airport is easily reached by airport shuttle bus from Stockholm city centre or by SJ regional train. Free shuttle buses depart from Västerås train station to the airport every 15 minutes. Parking costs SEK 120 per day and SEK 480 per week.